Foregoing the many usual summer jobs that college students take on, approximately thirty Saint Anselm College students spent their summer conducting research both on and off campus in several areas of study. 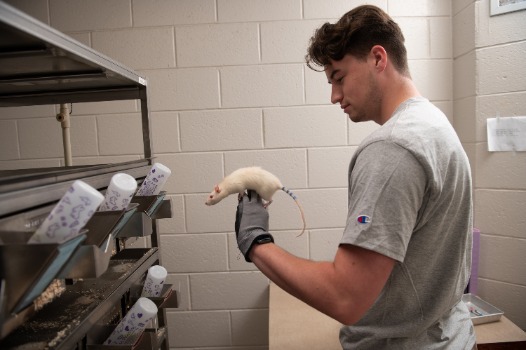 Twenty-four students received funding from New Hampshire IDeA Network of Biomedical Research Excellence (NH-INBRE), which funds the work of "outstanding biomedical researchers," students and faculty alike, to promote top-level biomedical research and research training in New Hampshire. NH-INBRE provides funds annually to Saint Anselm College to support the research of 22 students over an eight-week period during the summer months and throughout the course of the academic year. At the end of the summer, student researchers from all over the state of New Hampshire gather in the White Mountains region to present their research to one another.

Alongside Prof. Joseph Troisi, Ph.D., of the Department of Psychology, behavioral neuroscience major Jake Reynolds ’22 has spent the summer studying addiction behavior in live animals, and in this particular case, live rats. “Rats actually serve as a good model for human behavior,” says Reynolds. “Looking at the effects of nicotine on rats simulates looking at smoking addiction in humans. The information we gain from this research will hopefully be used to create better addiction treatment plans that are specialized between the different genders.”

Reynolds does not regret giving up a traditional summer job because the research grants him a special learning opportunity to be in a true laboratory environment. “I feel that the invitation to participate in an extracurricular scholastic learning opportunity such as this one is an honor and something that felt counterintuitive to decline based on my long term career goals,” explains Reynolds.

Another NH-INBRE recipient is biology major Sarah Stagnone ’22. Alongside Prof. Brian Penney, Ph.D., of the Department of Biology, Stagnone has spent the summer constructing models of the internal anatomy of sea slugs, also known as nudibranchs.

“There is not a lot known about nudibranchs, but we believe that studying them may lead to insights for medicine in human beings,” says Stagnone. “This leads to us wondering if studying circulation in nudibranchs could help us further understand the circulation of cerebrospinal fluid in the brain.”

Like Reynolds, Stagnone sees this research opportunity as a great way of getting experience in the field before graduation. “Gaining experience in research in my major has been helpful in narrowing down potential career paths which is invaluable at this stage of my academic life,” says Stagnone. 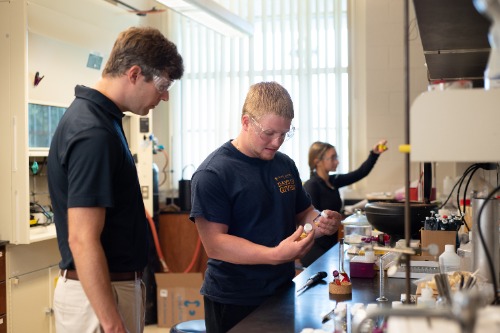 The Father Michael Custer, O.S.B. Summer Research Grant is given to students who spend the summer researching in the area of chemistry. One of the recipients of this year’s grant is chemistry major Brendan Parr ’22.

Parr, alongside Prof. Matthew Hurley, Ph.D., of the Department of Chemistry, has been researching molecules, invisible to the human eye, called nanomaterials. “The goal of this research is to attach the molecules with targeting agents, and they can be used as targeted drug delivery systems that will attack cancer cells and leave healthy cells alone,” says Parr. “This research can improve the effectiveness and mitigate the awful side effects of chemotherapy.”

Parr plans on pursuing a Ph.D. in organic chemistry and sees this research opportunity as beneficial for obtaining that goal. “Summer research has strengthened me as a student and a scientist. It forces me to draw conclusions from the data I am recording and makes me think more outside of the box than solely in the classroom setting,” says Parr. “I would like to thank Prof. Hurley, my advisor, for opening my eyes to what being a scientist is truly about.”

Not all of the research on campus this summer has been directly related to science. History and theology double major Madison Lessard ’22, has focusing her summer research on the Camino de Santiago, or the Way of Saint James, a pilgrimage route that ends at a shrine to Saint James in northwestern Spain. The roots of this pilgrimage route date back to the early Middle Ages.

Working alongside Prof. Sean Perrone, Ph.D., of the Department of History, Lessard has been extracting any and all material she could find from both primary and secondary sources regarding the role of James as a symbol and patron in building a sense of Spanish identity during the Middle Ages. “I have determined that ongoing relevance of the pilgrimage to James’s burial site has been a major factor in the development of the Spanish nation we know today, and that the Middle Ages were key in establishing a patriotic religious sensibility centered around a patron saint,” concludes Lessard.

Lessard also stresses the importance of research in her growth as a student and for her future work. “In preparing to apply to graduate school, I feel that this summer has been indispensably valuable not only to help me gain experience in my field, but also to give me a taste of intense research work is,” says Lessard. “This program has been so helpful in expanding my experience, strengthening me as a student, and helping me solidify my future plans.”

In addition to these projects, campus has been bustling with several other research projects taking place including work with snakes, octopuses, and various biomedical issues.