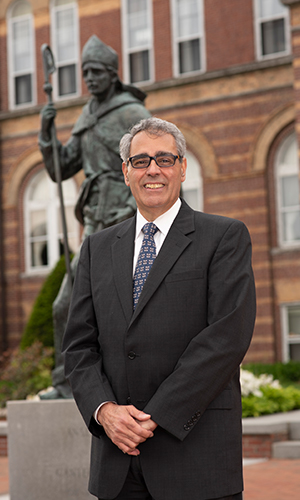 Dr. Favazza comes to Saint Anselm from Stonehill College in Easton, Mass., where he served as Provost and Vice President for Academic Affairs from 2012 to 2019, and prior to that in other academic leadership roles from 2012-2005. His leadership helped shape Stonehill’s current intellectual culture, and was instrumental in the move to restructure the academic program into two schools, as well as to develop and launch targeted graduate programs.

A tenured Associate Professor of Religious Studies at Rhodes College in Memphis, Tennessee, Dr. Favazza was also Director of the “Search for Values” Program for Interdisciplinary Humanities there. He and his wife, Dr. Paddy Cronin Favazza, Ed.D., are parents of four children: Alina, Ana-Marlise, Petr, and Isabella.

A Year in Review: Favazza's First

On July 15, 2019, Dr. Joseph A. Favazza, assumed the role as the 11th president of Saint Anselm College. In a year full of highs (2020’s Democratic presidential primary debate) and lows (a global pandemic), he’s become a beloved member of the college community. In the last year, Dr. Favazza was introduced to cherished Anselmian traditions from big move-in day cheers to the annual Christmas feast to welcoming presidential candidates to campus. In the face of challenges during his first year, he demonstrated resiliency and grace showing the Anselmian community that they can count on him to lead them through whatever storms (or viruses) threaten.

In a “Year in Review: Favazza’s First,” the college created a slideshow of photos highlighting the last year’s events both big and small.

Looking for an administrative office or college service?